Thru the years of my inordinate fondness for
all things multi-legged I have occasionally gone
off "on a tangent" or diverted from primary focus
to dabble a bit in things that MOST would find
un-nerving or frightful.

So, my next photograph is an example of one of
my "momentary lapses of reason" or focus. 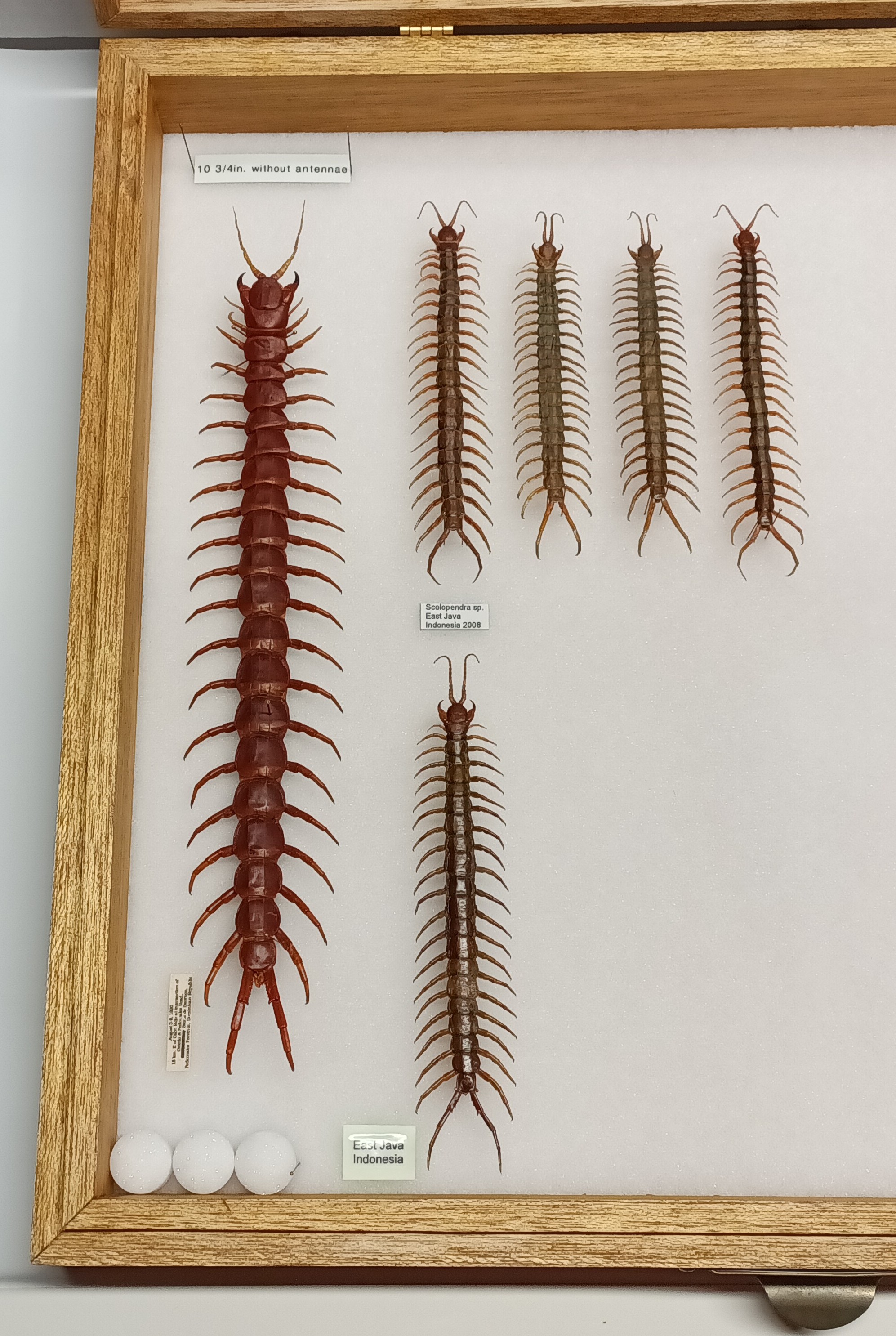 Giant centipedes or scolopenders are ferocious
predators in their realm. They are quite able-bodied
and fast enough to overpower anything that comes
close. The largest ones have no fear of tarantulas,
small rodents, snakes, or other underground dwellers.

It is well known that they are capable of delivering
a painful venomous bite that you won't forget; and,
their (general) un-nerving appearance and speed
capabilities means you don't want one getting inside
the dwelling you sleep in.

For those curious about that BIG one well, I personally
caught that superb beastie in early August 1990. It
was seen crossing a desert road in early morning in
Pedernales province. A nearby cave located amongst
a rocky "outcropping" told of the most likely abode
of this mini-monster....
Top
Topic: Does anyone have a bigger one? I mean an agrippina | Author: joachim | Replies: 13 | Views: 206

Do you think you could post us a picture of this personal
grand capture ?


I don’t have a photo as I didn’t collect it. It was worn specimen and I let it go ( most likely it became a meal for birds next morning ) . I do have video clip but it’s recorded on VHS tape and I never had the chance to transfer to more recent format.

My specimen was purchased 6 years later at the Toronto insect fair which was organized for many years by Ken Thorne. Suddenly the fair was not profitable anymore and he discontinued and no one else attempt to organize anything these days.
Top
Topic: Does anyone have a bigger one? I mean an agrippina | Author: joachim | Replies: 13 | Views: 206

Must have been a BIG thrill to see this species arrive
at your light sheets.

Do you think you could post us a picture of this personal
grand capture ?

How exactly does one even grasp this moth when its
wings are outstretched ? Best to net it then grasp and
inject ?
Top
Topic: Does anyone have a bigger one? I mean an agrippina | Author: joachim | Replies: 13 | Views: 206

eurytides wrote: ↑Mon Feb 06, 2023 9:06 pm All these female specimens and yet no one has taken the time to get eggs and rear. We still don’t know the life history of this species, which isn’t even that rare.

Peter Mollmaan who lives in Bolivia also known from YouTube Chanel pedromariposa tried to rear them. He obtained eggs from few females but his attempt failed.
Young caterpillars refused to eat many different type of plants that were suggested as possible food plant.
Few started to feed but shortly after died.

Indeed the species is common. I my self encountered only one specimen in French Guiana while moth collecting but I was at the end of the pic season for Thysania.
Top
Topic: Anteos maerula | Author: daveuk | Replies: 4 | Views: 36

Probably the author called it that because he was British, and the shape and colour reminded him of Gonepteryx rhamni, unless it was already called that before he wrote the book.

Indeed, eurytides I agree.
The species is an "enigma" in that manner. One would think after all these years we would have a better knowledge of this mammoth species !

It does occur on some Carribean Islands Trehopr but not the Dominican Republic according to my book on Butterflies of the West Indies. Interesting that in this book the common name is " giant brimstone" All these female specimens and yet no one has taken the time to get eggs and rear. We still don’t know the life history of this species, which isn’t even that rare.
Top
Topic: Anteos maerula | Author: daveuk | Replies: 4 | Views: 36

I don't recall this species being in the Dominican Republic but, it may be there.

I have a bunch of Dominican butterflies I can show that were all self-collected if anyone cares to see them...
Top
Topic: Other People's Things.... | Author: Trehopr1 | Replies: 9 | Views: 98

Here I additionally show a sampling of
some of my European/North African
holdings. Some incredible diversity from
the Neartic zone !

Whenever possible, I try to gather (like)
groups togather in one drawer (examples
are Morpho's or Lycaenidae -- as shown).

However, this just is not possible at all times
so, I wind up pulling togather that which
seems to (mix) well togather in a drawer for
a pleasing "eye-candy" result.

I don't pursue this avenue with everything I
have as I do have a portion of my collection
dedicated to "unit trays"/drawers as well as
other drawers dedicated to entire (series) of
species which I have collected personally. 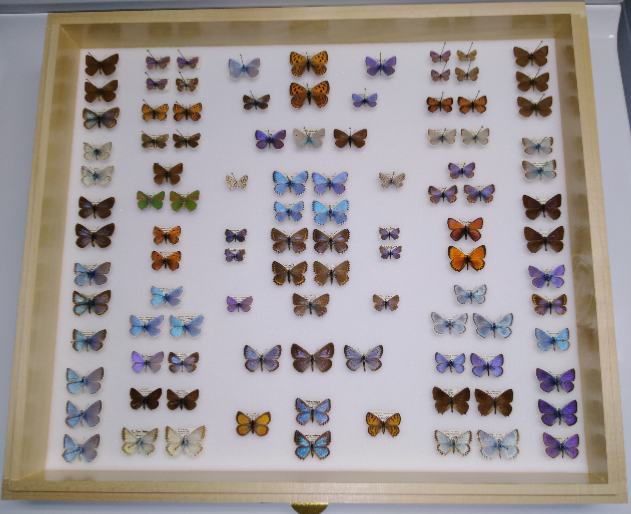 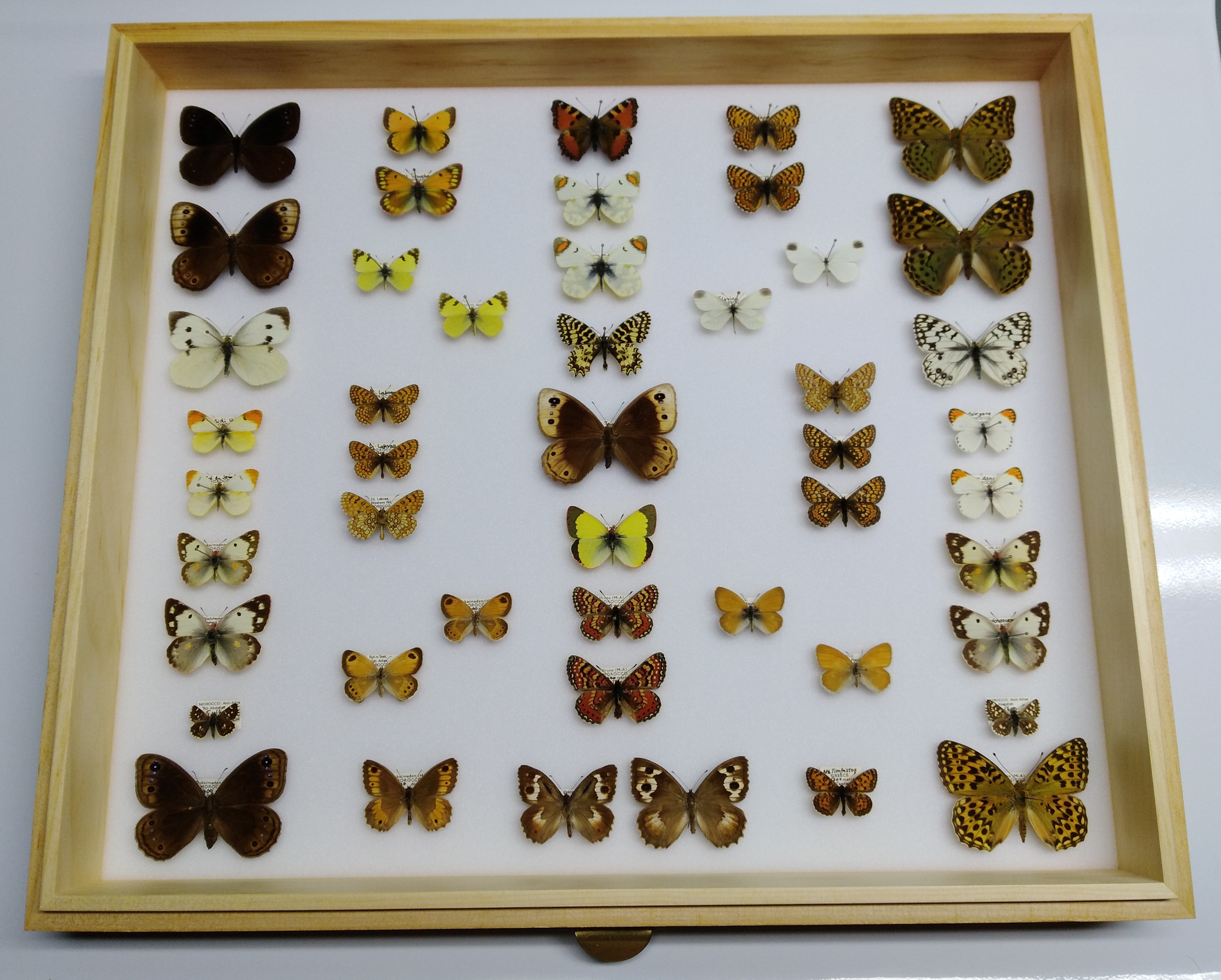 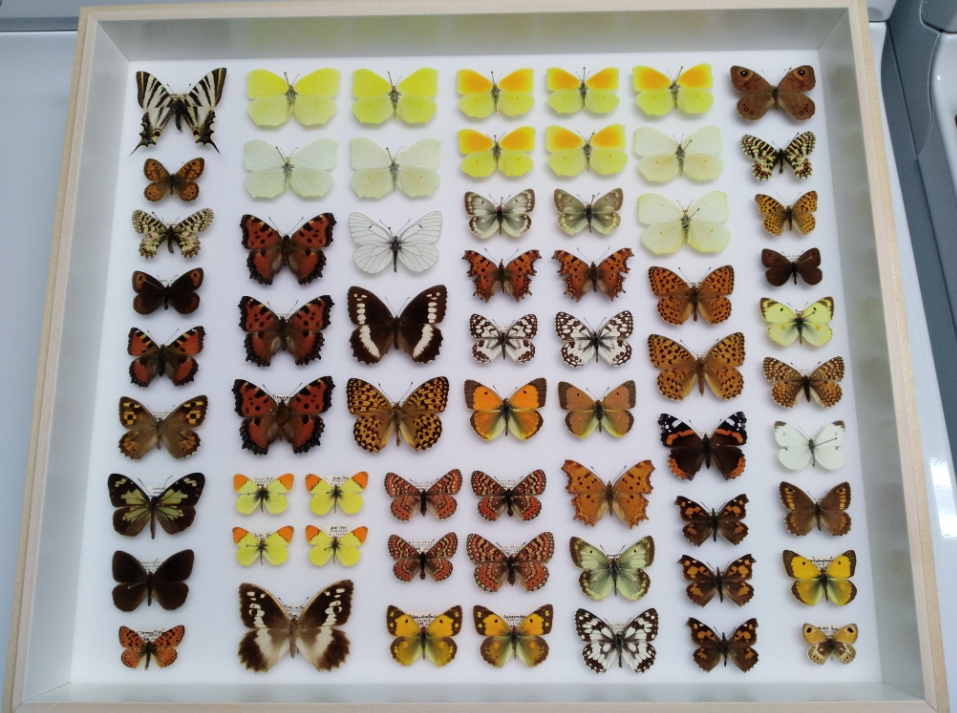 This very beautiful species is reputedly common over most of it's range. Despite this it seems to be rarely offered for sale.
A male from Mexico & a pair from El Salvador. I have females which are much paler. Almost white Thank you everyone for the kind regards !

Although, these specimens were once owned
by others I still "correct" or re-spread (some)
when I feel they need it. All of my material has
data attached to it to lend it scientific value.
Top
Topic: Other People's Things.... | Author: Trehopr1 | Replies: 9 | Views: 98 Very nice drawers, Trehopr. I think you & Daveuk do the best job mounting your specimens of anybody on this website.
Top
Topic: Does anyone have a bigger one? I mean an agrippina | Author: joachim | Replies: 13 | Views: 206

The underside of T agrippina is impressive also. I'm not sure whether there is a brown form and a blue form, or whether it depends on the viewing angle. On the subject of drawers: When I do finally get around to pinning / organizing my collection, I'd originally planned to use 16 X 20" shadow boxes to display my specimens on the wall. However, it now appears likely that in the not too distant future, I will be moving into a considerably smaller, more economical / energy efficient home, and will not have very much wall space. Therefore, it seems that I will need to house my collection in drawers instead, in as compact a manner as possible. If anyone can recommend a source for good quality (but reasonably affordable) drawers / drawer cabinets in the US, please let me know.
Top
Topic: largest moth wingspan question | Author: adamcotton | Replies: 15 | Views: 295

I totally agree with you Paul !

Note that the forewings of this record Thysania are dropped a bit ( not at 90° to the thorax ) thus it gains few millimetres , I suppose the “correct” wingspan would be around 301-303mm which most likely giving it the largest anyway.
The specimen form Oberthur’s collection most likely is spread in Victorian style with forewings upper edge almost at 90° to the body which gives the extra few cm although it might be the largest specimen.
Top
Topic: largest moth wingspan question | Author: adamcotton | Replies: 15 | Views: 295

Thank you mothman55 for that wonderful head on photograph of the Guinness records specimen !

As far as I know that one still holds the official record in terms of size since no one has seen the original specimen of Oberthur's since it's disappearance from his collection.
Top
Posts