Give us your opinion about an entomological book or documentary and inform us about new publications.
Post Reply
11 posts • Page 1 of 1

This was published today:

After molecular and morphological analyses, the taxon septentrionicolus Page & Treadaway, 2013 is shown to be a distinct
species, and Graphium adonarensis (Rothschild, 1896) is placed as conspecific with Graphium sarpedon (Linnaeus,
1758). Graphium huangshanensis Wu & Ma, 2016 syn. nov. is synonymised with G. septentrionicolus.

I thought it would be worth mentioning that if anyone has specimens of 'Graphium sarpedon' from S Tibet, particularly Motuo County from where Chinese sellers sometimes have specimens for sale, these are likely to be Graphium septentrionicolus.

Here are some sample specimen photos 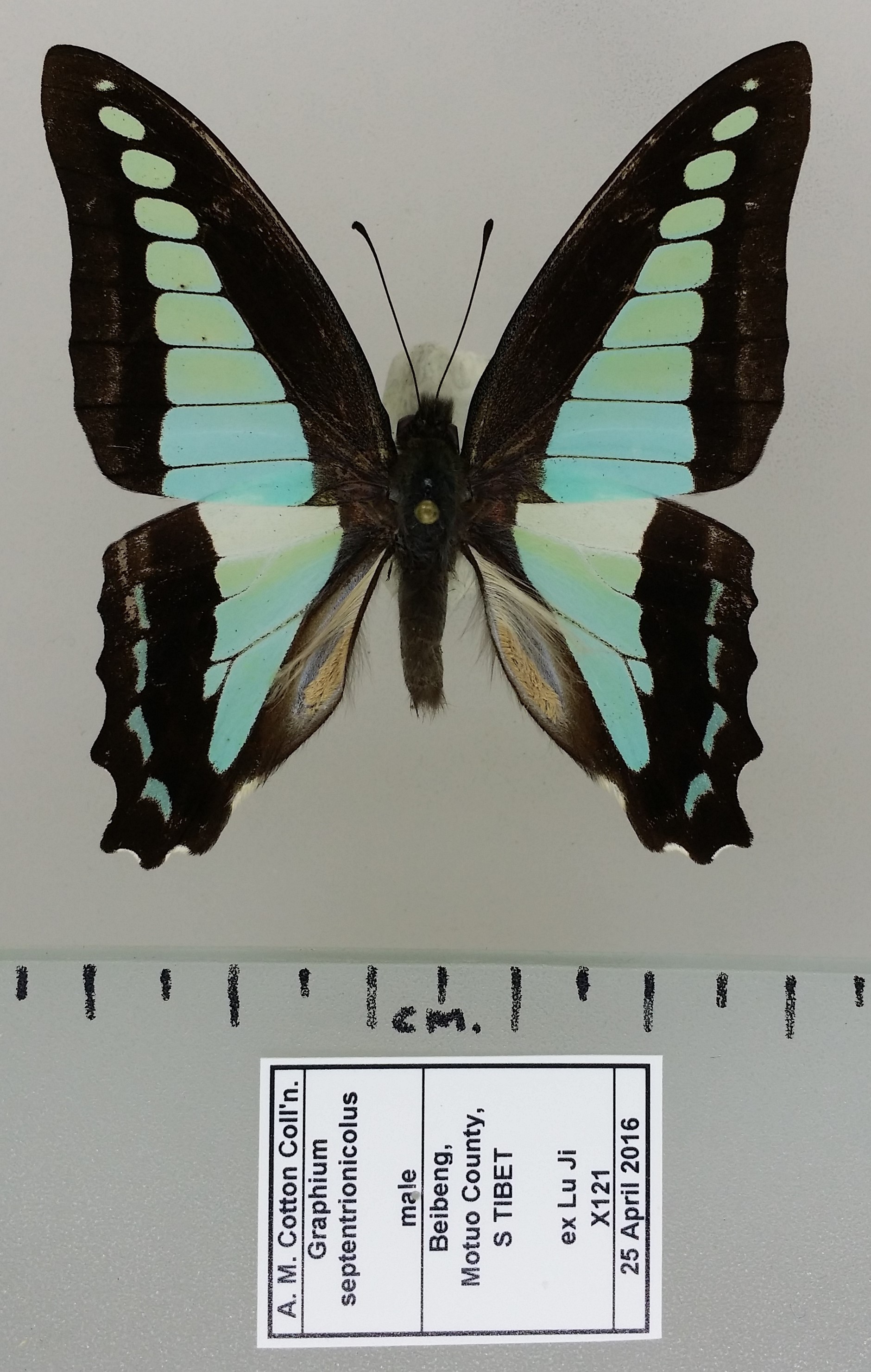 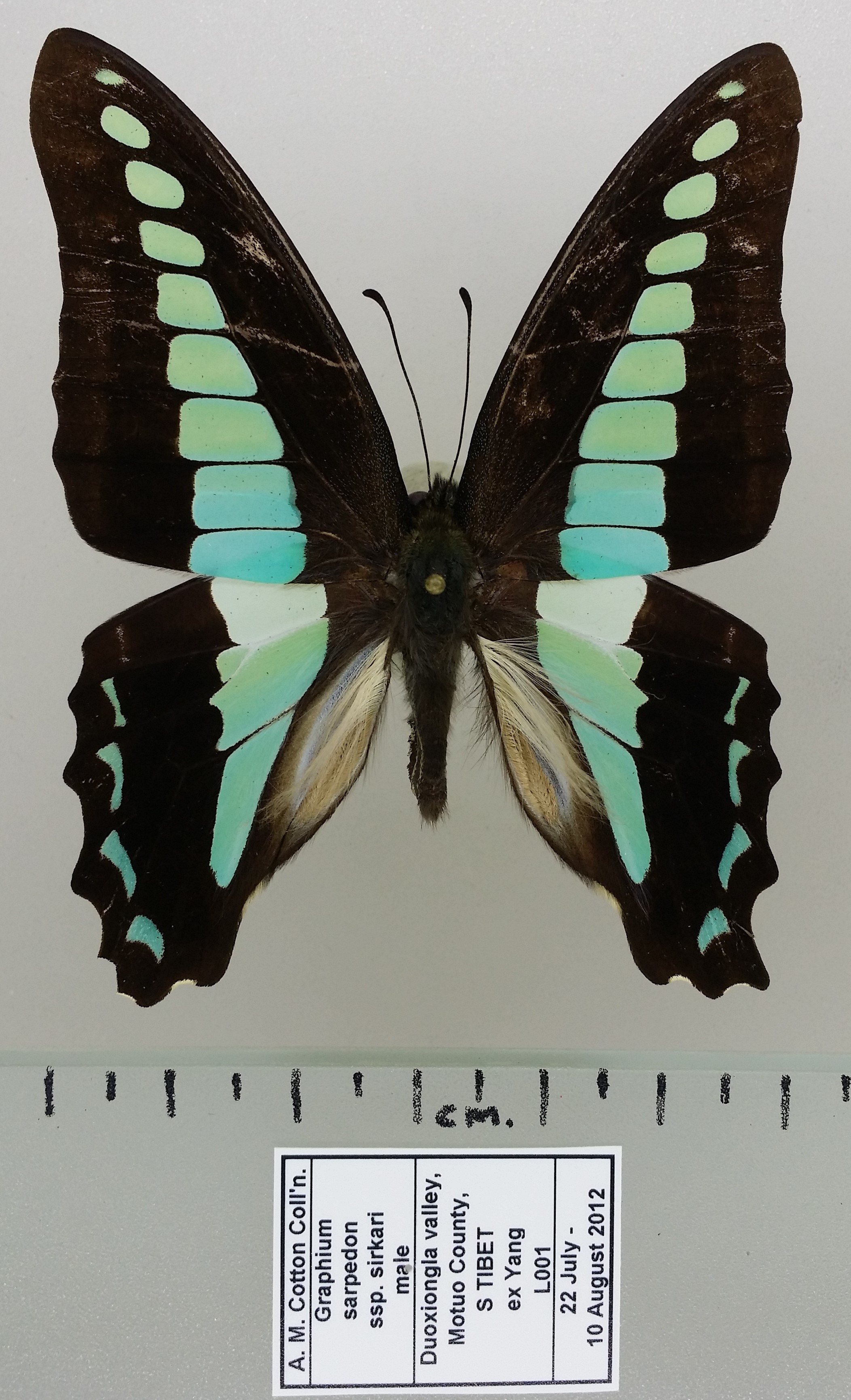 Note that I originally thought the summer specimen was Graphium sarpedon, hence the name on the label. It was only when we analysed the DNA of this that we realised they were actually Graphium septentrionicolus, the summer form of which is much larger than G. sarpedon.

Here is a specimen of G. sarpedon for comparison: 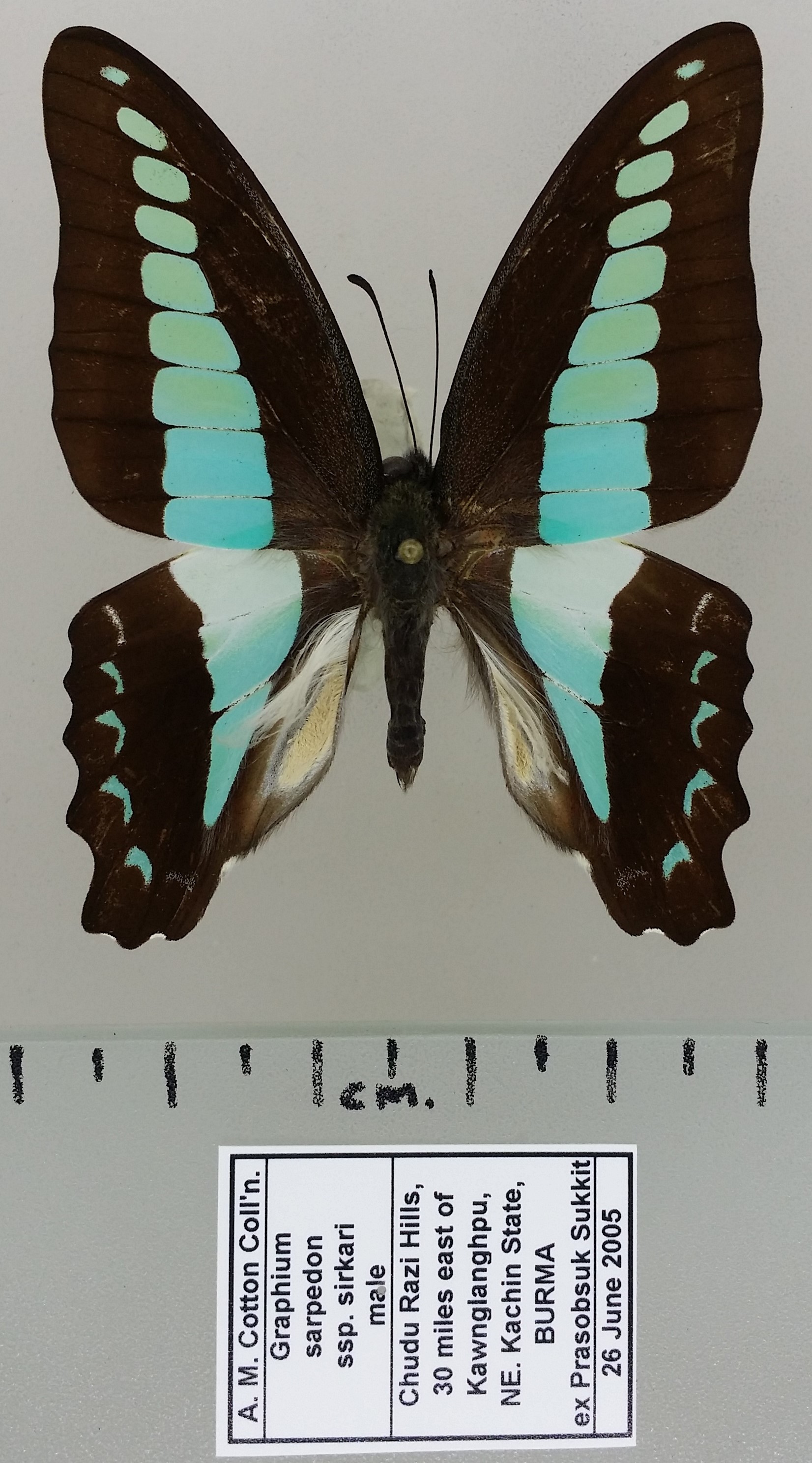 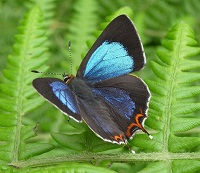 Thank you Adam for your new work. I am very much interested in Himalaya butterfly fauna. This new discovery is amazing. I always take it for granted that Graphium sarpedon is one stable species although it shows great individual/seasonal variations. It must be interesting to compare early stages of this sarpedon-complex.
Top

Graphium sarpedon is a complex of mainly allopatric species ranging from Pakistan to Japan and through SE Asia to the Solomon Is and Australia. There are only two instances of overlap between two species known so far, G. sarpedon and septentrionicolus in mainland Asia and G. milon and monticolus in Sulawesi. FIGURE 1. A phylogenetic tree of the Graphium sarpedon species complex reconstructed with BEAST showing that Graphium
septentrionicolus is not closely related to G. sarpedon. Branch support for this BEAST chronogram is indicated with bullseyes
at each important node. Bayesian inference posterior probability support values are indicated with a ring of colour surrounding a
circle that indicates maximum likelihood ultrafast bootstrap support. See graphic in upper left corner for explanation of support
values associated with each colour. Tip labels indicate species and subspecies (if applicable), collection locality formatted as
two-letter ISO country codes with island or province (if applicable), followed by specimen ID. An asterisk indicates taxa placed
in Graphium adonarensis by Page & Treadaway (2013).

mokky wrote: ↑Fri Jun 17, 2022 3:09 am It must be interesting to compare early stages of this sarpedon-complex.

Indeed, but at this time the early stages of G. septentrionicolus are unknown. Presumably the species feeds on species of Lauraceae.

I just gotta ask- Adam, how accurately could you reproduce that phylogenic tree from memory? Don’t be humbly vague, tell the truth.
Top

Not precisely, particularly the middle bit. I certainly wouldn't remember how the various subspecies branch from each other, either in sarpedon or the various species in the middle.

Fantastic work and paper thanks Adam! As always!
Top

Thank you for the comment, I am glad you like it. As you can see it was an international collaboration mainly just to confirm that one taxon is a separate species. It is amazing how many new discoveries are being made from specimens right in front of our eyes, even in such well known groups as Papilionidae.