This past weekend I attended an annual meeting of Lep researchers at Cornell University Insect Collection (CUIC) hosted by Jason Dombroskie, the collections manager. It was a small gathering, with two groups studying micros (no, like really, really micro Leps) from southeastern Pennsylvania, and from Long Island NY, plus a smattering of other interested parties. The micro teams are serious, dead serious, and use the weekend to both identify their 2022 specimens as well as to correct errors in the Cornell reference collection. I brought several thousand specimens, mostly papered. I was apprehensive in that I know many collections are sitting on thousands of papered specimens for decades. But Emily from CUIC wasn't bashful, she took them gladly. I guess the undergrads are going to be very busy for a long, long time.

I'd also brought set specimens to fill out the Cornell collection, including three ssp of Papilio fuscus, a few Graphium hiceton, some delias, etc. These were easy, as my previous audit of CUIC's Solomon Island material readily revealed holes. It's rather shocking to discover that such an esteemed collection could be missing specimens for which I have dozens, but that is indeed the case.

A lot of my time was spent on Audit II, that is going through more of the CUIC to see what else they are missing that I have. It was fairly easy though time consuming; it's at the point now that I can pretty well guess whether they have a particular species. As a result, I have a list of needs including Papilio, Polyura, Lucanidae, and Buprestidae. My next trip I'll move more of my extras from my house to their collection, a win-win.

Some of the undergrads were identifying and collating moths, and one remarked that it was the Bob Iveson collection they were working on. That was great to hear, since I'd curated that collection for several years then coordinated its move to Cornell.

We discussed my Tiger Swallowtail research, and Jason gave me two specimens (and a student gave me a third) to take back and deliver to the geneticist. I went through some of the Papilio glaucus drawers and noted what looked like the unknown Mid Summer Tiger, but upon inspecting the label, it was captured in early June; so much for morphology.

I did take a moment to look at the spectacular Papilio pilumnus. Overall, it was pretty much a lot like work! Lunch break with pizza was a nice mid-day distraction when we had a chance to actually interact. Looking forward to next year.
Top 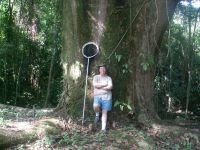 I'm curious - were any of that P. pilumnus series taken in the US, or are they all Mexicans?

That's a great question. CUIC has two drawers of pilumnus. Most are in near perfect condition which leads me to believe that they were raised, or maybe they were cherry picked. I only looked at two labels which I'll try to post below later; they were from different cities.

What caught my eye is some significant differences (e.g., tail length and thickness) between some of the specimens, leading me to wondering if pilumnus may have subspecies (whether identified or not.) But I have enough on my plate right now, so if I ever dig into that, it will be some time.

So the short answer is I don't know. But I did look on iNaturalist, and there are no records from TX; close, but still on the Mexican side. I searched BOLD and either I did it wrong or there is nothing in there.
Top